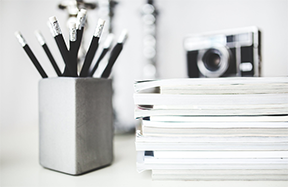 I have been a professional magazine freelance writer since 2005 when a local campus magazine, Boyd Street, paid me $50 for a submission. I was thrilled! It was the first time a publication paid me for my creative work. Following this, I landed more consistent freelance work with Oklahoma Living magazine starting in 2007 and most recently with Luxiere magazine starting in 2016.

I have been a full-time journalism educator during the entirety of my freelancing career, so I know it can be difficult to balance time to include freelance work. However, I don’t think I’ll stop any time soon. The reason? Writing creative non fiction, also known as feature writing, gives me small dose of creative satisfaction. I love it, maybe more than any other form of writing I do. It combines so much of what I learned in both journalism and professional writing during my bachelor’s and master’s degree programs at Gaylord College.

The majority of my freelance work has been profiles–writing about a slice of a person’s life, what makes them unique–finding the story they have to tell that no one else has. My favorites include a man named Lester Lurk who unexpectedly found himself as a quite authentic Will Rogers impersonator, and an Oklahoma City woman who sees her in-home chef and meal prep business as a way for overworked people to allow themselves some breathing room.

My favorite moment when working on a freelance piece is when I realize the real theme of the story, as with the chef I just mentioned. While interviewing her, she mentioned that many people, especially women, put intense pressure on themselves to be perfect, especially in the kitchen. She said some people might think her service was just for rich people, but that wasn’t the case. She maintains clients of varying socio-economic statuses. Rather, she described how her service is for people who will allow another person do something for them (often something they do not enjoy or are not particularly skilled at), in order to eliminate one stressor from their lives.

I loved this idea, and when she said it, I knew it was the theme, or the essence, of the piece. Theme can be difficult for the new feature writer to grasp. Theme doesn’t arrive at the same time for every piece-in-progress. Sometimes I hear it clearly during a moment in the interview, as with the chef. At other times it pops out as I rifle through my interview notes during the first-draft process. Sometimes I have an idea before I even interview the first source, and that theme works. Other times the theme is elusive, and I struggle to find the element that will help me weave the story together.

Regardless of how easily or not a feature piece comes together for me, I always enjoy it. My next goal as a freelancer will be to make some pitches to larger regional and national magazines to take my freelancing to the next level. After writing for Oklahoma magazines for almost 15 years, I look forward to this next step.